Home About Our People Stefan Poikonen 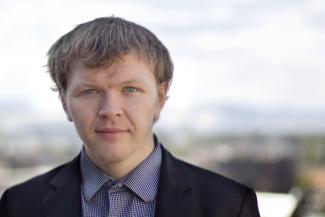 Stefan Poikonen’s research focuses on mathematical and computational optimization in operations research. Recent research has particularly focused on optimization and routing problems related to emerging transportation technologies (e.g. electric vehicles and drones).  Optimizing electric vehicle recharging policies and integrating drones into consumer delivery or disaster response fleets can reduce costs, road congestion, and emissions, while simultaneously increasing the quality and speed of service. These outcomes are especially of interest to large logistics players (Amazon, UPS, FedEx, US military, etc.) and the consumers they service, but also have positive externalities to society at large. Methodologically, this research uses a mixture of mathematical programming, heuristics, and analytically constructed bounds.

Poikonen's research has appeared in journals including Networks, Optimization Letters, and INFORMS Journal on Computing. He has also presented his research at numerous field-leading conferences across the globe. Poikonen has served as an expert reviewer for several journals in the field.

Prior to joining the University of Colorado Denver, Poikonen taught in various capacities at the University of Maryland, where he obtained his PhD in the program of Applied Mathematics and Scientific Computing under the guidance of Bruce Golden.  He also worked as a consultant/researcher at DecisionQ Corporation and as a Technical Services Engineer at Epic Systems.

Poikonen, Stefan, Bruce Golden, and Edward Wasil. "A Branch and Bound Approach to the TSP with Drone." to appear in INFORMS Journal on Computing.