Home About Our People Jian Yang 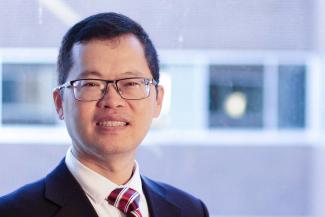 Jian Yang is J.P. Morgan endowed chair and Research Director at J.P. Morgan Center for Commodities, discipline director/department chair of finance, and founding director of Center for China Financial Research at the University of Colorado Denver. He is also a Research Fellow of the National Institute of Financial Research at Tsinghua University in China, and previously held positions of visiting fellow at People’s Bank of China and visiting scholar at St. Louis Fed. Prior to his joining CU Denver, he worked as an assistant professor/associate professor at Prairie View A&M University in Texas.

Yang is recognized as one of the most prolific authors in finance during the past 50 years based on core finance journal publications, and one of 15 commodities friendly professors in the world. He has published about 70 refereed journal articles on such journals as Management Science, Journal of Financial and Quantitative Analysis, Journal of Econometrics, Journal of Money, Credit and Banking, and Journal of Banking and Finance.

Yang's research has been reprinted in a four-volume major finance work reference book (together with classics of several Nobel Prize Laureates on the same volume), won a number of research awards including Asian Finance Association PBFJ Best Paper Award, cited in many textbooks and policy reports of international organizations and governments around the world, and featured by over 50 media outlets including New York Times, Reuters, The Washington Post, Daily Mail (UK), CNBC, US News and World Report, and Economic Daily(Chinese). His research has also been presented at European Central Bank, FDIC, People’s Bank of China, EIA, Hong Kong Monetary Authority, and CSRC. He has served on the editorial boards for ten academic journals, including top journals on derivatives and real estate. Yang’s research-based comments also have been published by Reuters, Financial Times, Bloomberg, China Daily and other media outlets in dozens of countries and in multiple languages.

As of  March 2022, the standard count of (all-inclusive) citations was over 5,100 cites based on Google Scholar and well over 1,500 cites based on Web of Science, with a Google Scholar h-index of 38.  Cites by other researchers include citations from such journals as Journal of Financial Economics, Review of Financial Studies, Management Science, Journal of the American Statistical Association,  Journal of Monetary Economics, Journal of Econometrics, Review of Finance, Operations Research, Journal of Banking and Finance, Journal of Financial Markets, Journal of International Money and Finance, Journal of Empirical Finance,  Real Estate Economics, and many textbooks in finance, econometrics, real estate, commodity markets, and optimization (including two textbooks authored by a Nobel Laureate and a chair professor at Harvard, respectively).  These papers have also been cited in policy reports by  IMF, World Bank, Bank of International Settlements, World Trade Organization, Organization for Economic Co-operation and Development, European Commission, US International Trade Commission, UK Scottish Government, Government of India, among others, and also frequently by policy research working papers of major international organizations (e.g., IMF, World Bank, BIS, FAO) and central banks and other financial regulators (or in a few cases other national government agencies) in dozens of countries around the world (e.g., the US, EU, China, Japan, France, Italy, Canada, Brazil, Chile, Thailand, Austria, Finland, Philippines, Chile, Colombia, Czech, Greece).

One of these research papers has been reprinted in a four-volume major finance work reference book. Some research papers have been featured by more than 50 newspapers/TVs/magazines/radios in English and in Chinese, such as New York Times, Reuters, The Washington Post, CNBC, Daily Mail (UK), US News and World Report. Yang’s commentaries and analysis on commodities (and to a lesser extent China's finance and economy) are published and quoted by news media reaching out to dozens of countries and in several languages (e.g., English, Chinese, Spanish, Indonesian, Italian), including Reuters, Financial Times, Bloomberg, Forbes, China Daily (global & US editions, European Weekly & African Weekly), World Finance magazine (UK), Australian Financial Review, RT TV network (Russia), People's Daily (Chinese), Economic Daily (Chinese), etc.

Please refer to the CV for specifics

15 Commodity-Friendly Professors in the world (by CommodityHQ.com), 2013